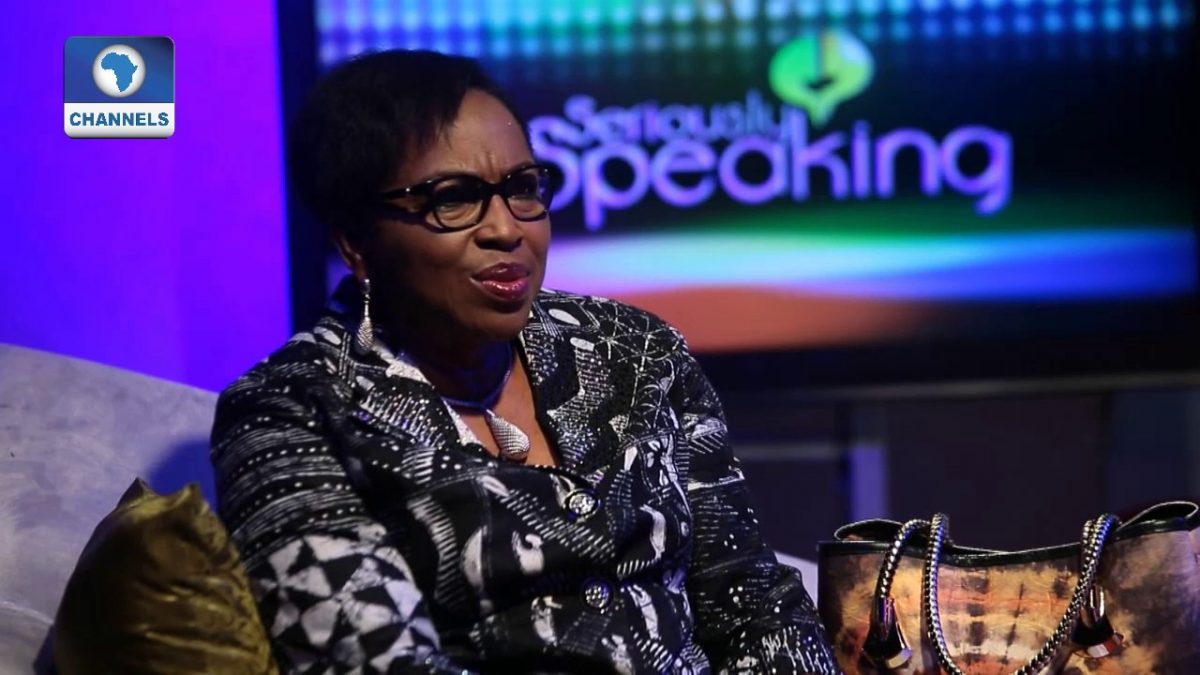 Lagos — Chinwe Ezenwa is the Managing Director of LeLook, a company promoting Nigeria and its many potentials and resources. The company celebrated its 30th anniversary recently. Daily Trust correspondent asked the MD how she came about the African print-made bags and how it is impacting on the populace and the country at large.

As the owner of LeLook, can you give us an insight into how it all started?

Well, I wouldn’t say I am the owner of the business but a tool God used to drive it. The business was founded because of the need to rehabilitate a brother of mine who is disabled. That was how we came about it. I have a brother who is deaf and dumb and when I came back from Canada, he was unemployed and there was no opportunity to get him engaged. I enrolled him in a hairdressing school and I said to myself that if he cannot talk and hear, at least he can see, and that was what brought about LeLook. I am being moved now (tears flowing down hers cheeks) because when we opened here 30 years ago, my brother would not know how to book appointments with people. So, I had to employ some hairdressers who were working with him to do some of these things. But LeLook has metamorphosed into what we are seeing today. Now, that my brother has moved on. He is now in the United States of America doing great things with hair. And I had to take over when I retired from the Federal Civil Service.

LeLook became a place for me to fall back on. And that is why we are celebrating today. Our celebration is that of years of service, perseverance and determination and hard work. My brother could have been here but for some logistical reasons. It’s a bit difficult to get him to travel all alone.

So, what brought about the diversification because you are into hairdressing but it seems LeLook is more known today for bag-making?

Yes, when we started, it was a hairdressing outfit at my house at 1004 Estate, Victoria Island. But the neighbours were complaining that we were disturbing them, that was when we moved to this premises. So, about 20 years ago, in the year 1995, we ventured into bag-making. This is also as a result of my younger sister who actually has a challenge. Suffice it to say that in my family, we are seven, and two of us have challenges. That was how we came into the business of making bags. I promised to make that one great also.

Most of your works are put on exhibition with the design of African print, what informed this?

Well, I know many people don’t always like to wear it but I do say to them, if you cannot wear it, carry it. Carrying it has become a fashion of sort and I am determined to popularize it beyond where we are today.

In retrospect, how will you describe the acceptability of this initiative among the populace you were trying to woo and make sales to at the early stage?

Well, many never liked it. They preferred to carry around their “Made in Italy”, “Made in Germany” among other foreign-initiated bags at that time. But we were quite resolute, we kept enlightening, kept pushing and kept letting them realize the need to patronize our own. And today, we have establishments, corporate bodies and schools that have been patronizing us and that we have been supplying some of our products. Today, we have bags specially designed for students of Kings College and Queens College, Lagos and other schools. Some parents now ask us to supply those bags both within and outside Nigeria. Their idea is to make their children become acclimatize with their cultures because those bags you are seeing showcase our culture.

What will you say is the greatest achievement of LeLook so far?

LeLook’s greatest achievement is not just all about its popularity which has transcended Nigeria. It is also about empowering the youth as well as women. It is about creating jobs for people who ordinarily will not have had anything doing. These are people we have now engaged. Again, it is about promoting Nigeria and its many potentials and resources. It gives me joy today that as much as these bags are all over the world, anywhere you find them, you will found printed on them: “LeLook… made in Nigeria”.

The idea behind LeLook boils down to entrepreneurship. How will you describe the entrepreneurial interests and skills of young Nigerians today?

Well, in fairness, I can tell you categorically that based on my interactions with Nigerian youths, their entrepreneurial zeal and skills are quite great. And I may say the environment has also been made a bit conducive for them. There is an emphasis on the word, “a bit”. Lack of employment had actually made many Nigerian youth and women to rediscover themselves. The fact that there are no jobs had actually forced many to start thinking on their own. For the youths who are yet to rediscover themselves, I think they really need to have a rethink especially as it affects going about and looking for jobs. But for us at LeLook, we are marching on. We are employing the unemployed, giving them a new lease of life.

While growing in the business, have you had support from government?

At least through efforts from the Bank of Industry (BOI), Nigeria Export Promotion Council, among others, we have pulled through. But they are still demanding for things we cannot meet.

Tall orders. Collaterals we can’t meet yet. But if you ask me, what is collateral? Collateral is your idea. It is also your skill. Those are the things I believe they are not factoring in yet.

But are there no associations that can serve as pressure groups on the government that you belong to?

I am a member of the Fashion Designers Association of Nigeria (FADAN). Indeed, we got a N1 billion loan from government and that is what some of us who are members are trying to access now. But even at that, there are conditionalities attached. LeLook can meet them but what about the others? Aside FADAN, we also have membership with relevant associations such as, African Women Entrepreneurship Programme (AWEP) USA, Women in Shipping and Trading (WISTA) Women in Logistics and Transport (WILAT), Global Artisans Network, among others.

What of getting government to make banks give loans to private establishments like yours?

The banks have been given the opportunity to develop Small and Medium Scale Enterprises (SMEs) but they have not. They have what they called SMIEs policy that requires them to reserve 10 percent of their earning for the private sector to access, but how many people have accessed that? There is nothing like that! I dare say, it is not there! People should investigate. It is now that government is pulling all its accounts from banks that many of them will go idle. So, they will have no choice but to start looking for very serious private sector people to partner with. If not, they will lose a lot of clients.

Specifically, how will you describe challenges of your job so far?

It has been rough and tumble. Challenges are there. And one greatest challenge we have been facing is that of irregular power supply. Energy is a big problem. Every now and then we run on 24/7 electrical generator. Even as we speak, we are running on generator. Fifty five years of Nigeria’s nationhood, everybody still run on generators.

Let’s talk about your workers, what is your staff strength?

How much of the materials being used for production is sourced outside Nigeria?

None. All are made in Nigeria products. Rather, we are the ones exporting. And the market out there is quite excellent. In fact, they appreciate these things better than Nigerians do. The Germans love these, the Parisians love these, the Americans, all love these. Anytime they are doing anything in American embassy, we are always invited. Miss Sonia Institute, they have to come all the way from America to visit us and they even handed me a medal.

How has the LeLook efforts touched on women and the less privileged?

Outside my brother, I have also gone out to and picked another disabled young man from the deaf institute. He has been with me for the past 30 years. He came from a family of 10 and he was more or less abandoned at the time I met him. But he has been with us since. He is still with me. And for the women, I will say as a leader in this industry, many of them have had cause to look up to me as a role model and I can say I have been playing that role.

You spoke passionately about having Nigeria-made products being sold to the outside world. To what extent will you say your work is being celebrated outside the shore of Nigeria?

The desire to engender pride in our African heritage and to revive rare, artisanal fabrics inspired us. We began with local artisans in Lagos, Nigeria and Accra, Ghana to create apparel and accessories that were modern and trendy, yet undeniably African. Through these efforts, local retailers once again began taking pride in carrying locally made products, which caught the attention of international audiences. The demand grew. And so did our dream.

We envisioned a brand that celebrated and honoured African tradition but through a lens that is distinctive, modern and of quality. It had to be bold; it had to be extra-ordinary. Our philosophy is simple – Do well, do good. We are seeking to place a daring and passionate stamp on the market place. We have attended several trade fairs and exhibitions around the world and have made statements in fashion. We were at trade mission/exhibitions in Washington, Atlanta, Detroit and Pittsburgh in 2013, trade fair/exhibition in Dubai, UAE in 2013, Nigeria-Canada Investment Conference /Exhibition Toronto in 2013, Lagos International Trade Fair in 2014, Ghana International Trade Fair Accra in 2014, Magic Fair at Las Vegas, among others.

You were once quoted as saying despite the number of years you have put into your work, you are not likely to stop anytime soon. What will you say is your life ambition?

I want to be Louis Viston of Africa.

If you have any question, please contact us at info@lelook.us,

Subscribe to the weekly newsletter for all the latest updates

You were not leaving your cart just like that, right?

Enter your details below to save your shopping cart for later. And, who knows, maybe we will even send you a sweet discount code :)